I spent about 3 hours putting together last week's blog post (Week 7), I made a slight error, and I lost the whole thing! So, apologies for not having a post last week - I just didn't feel like writing it up again! I'll include a short(ish) summary of what happened that week!

* Edit - I apologize in advance for the long post!

Our speaker for the week was Fiona Gifford, from a YWAM Base in Cape Town, South Africa (Muizenberg), and she spoke on the topic of Discipleship and the Lordship of Christ - it's a very broad topic, and she spoke on a variety of unrelated, but relevant topics!  One thing that really stood out to me from her, as a speaker, she really met us where we were at!  She took the time to meet up with us throughout the week to get to know each of us individually.

What exactly is Lordship (of Christ)?  Basically, it's metaphorically bowing the knee to the Lord - including Him in all our decisions and keeping Him in everything we do.

Fiona is a very interactive speaker, and we did many unique exercises throughout the week that helped reinforce the topic!  One such exercise involved pairing up with a person of the same gender, looking them in the eye, and asking God for a revelation of how He sees that person - very awkward and strange at first, lots of nervous laughter, but in the long run it was quite profound, and helped us to see our fellow trainees in a new light!

In James 4:6, it says that God opposes the proud - that's quite a powerful statement!  God resists pride because He is humble - He puts humanity first!  We think of pride as being something most of us don't really have - maybe we're not snobbish and aloof or whatever - BUT there's actually quite a bit more to pride than that!  First of all, there are 2 aspects of pride - Superior Pride, which most people think of when they think of pride (the typical statement would be "I am better than you"), and Inferior Pride ("You are better than me").  One thing that came up in Superior Pride that stood out was that perfectionism is one aspect of it.  It is honouring to give God all that we have, and give Him our best, but who are we to say that we won't do something at all because we can't do it perfectly?  Inferior Pride often comes into play when we dwell in self-pity - we consider others better than ourself (in a negative way).  Interesting things to think of..

We also talked about the differences between Flattery, Compliments and Encouragement, what reactions and responses were about, Stubborness, Independence and Feedback; However, I don't have the time to talk about all of those things!

On Friday (the 26th), we had our second gig night.  The bands were definitely better this time around!  I was assigned to the bar, taking food orders for hot dogs and chips (french fries), and selling fizzy drinks (pop), tea, and water.  It's hard to have conversations in the noise, but I have the added benefit of being able to lipread! There were a lot more teens this time that came drunk and under the influence of other things, but it was just a great opportunity to love on them!

On Saturday (the 27th), a few of the DTS went into St. Albans with one of the YWAM base staff to a local church that was hosting a free Community Day.  We were volunteering in a prayer room, praying for different people coming in that wanted prayer!  It was a great time of just serving the community, even though we didn't have to be there!  That evening, one of my fellow trainees organized a surprise campfire/party for another trainee who was just accepted to Medical school!  DTS isn't just all work and no play - we have plenty of fun times! 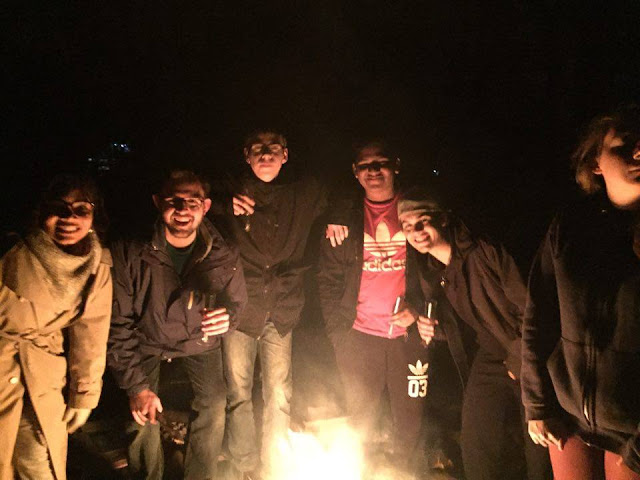 Hanging out by the fire! 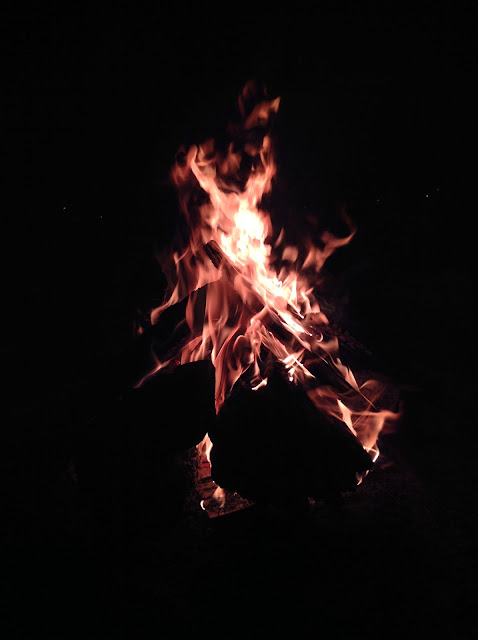 Throughout the weekend (Friday and Saturday), the September DTS started returning from their outreaches to Cambodia, Uganda and Greece (on The Next Wave - a ship ministry).  It's been an interesting week getting to know these new people (who are awesome people), and learning to share Number 9 (our residential building) with them!  They all have unique stories from their DTS experience and outreaches!  This DTS is the All Nations, All Generations (ANAG) DTS - they have trainees from 18, 19 all the way up into their 60's!  Goes to show that you're never too young to do a DTS - I strongly encourage anyone who feels like doing a DTS to do one - age is not a limiting factor! 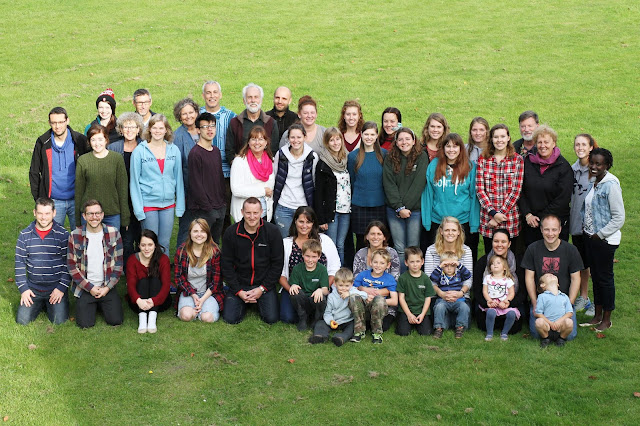 Well, now I can write about this week!  On Sunday, my roommate and I stopped by a burger stand on the way home from church, and we saw they had crocodile burgers, so in order to "prove that man is mightier than the crocodile" (my roommate's words, not mine), we got a burger to try! It was actually quite good! 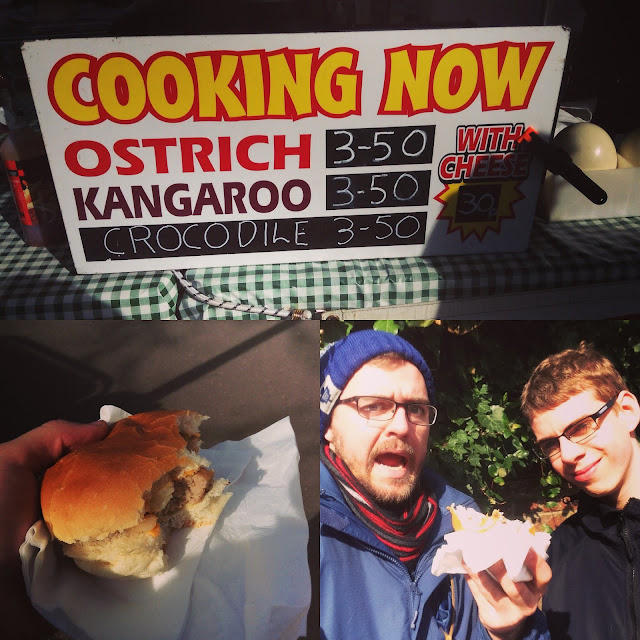 Definitely a unique food to try! Especially in England..

Our speaker for the week was Anne Sloan from the YWAM Harpenden Base, and she spoke on Identity, "Who Am I?"

We talked quite a bit during the week our Identity in Christ, then looked at different personality traits that we have.  This was a crucial week, because it helped us to understand ourselves, and by understanding who we are, and why we act the way we do, we can use our gifts in ministry more effectively.

Extroversion (E) vs Introversion (I):
- Extroversion: these people focus on the outer world, of people around them, and what is happening.  They get their energy from being with people and engaging in activities.  They usually say what they are thinking, they act first and think later, tend to be sociable and expressive.  Only when they don't have as much energy, they step into their inner world
- Introversion: these people focus on the inner world of ideas, experiences and memories.  They are energized by time alone to reflect and think.  They think things through, and keep their thoughts to themselves - think first and act later!
- This does NOT mean that extroverts like people, and introverts don't - it's all about where you get your energy from!

Sensing (S) vs Intuition (N):
- Sensing: these people take in information with their five senses, they pay attention to the 'here and now', they tend to be practical people with common sense!  They are observant about the details around them, like detail and instruction.  They value a methodical step-by-step approach to situations, want to know the practical applications or results to things. Approximately 76.5% of people have Sensing
- Intuition: these people tend to have their information come in from a 'sixth sense', they trust their hunches and intuitions.  They focus on the big picture, and want to see patterns and new possibilities, however, they may get facts wrong (not important to them), and can be misunderstood because of this.  They are very visionary, and anticipate the future.  They let imagination and inspiration be their guide

Judging (J) vs Perceiving (P):
- Judging: these people like to have an ordered life, they like to be in control of their environment.  They will avoid problems by planning ahead, and trying to anticipate situations.  They try to avoid last minute stresses, enjoy finishing things (like closure), feel that work comes before play, and want to have things settled and in a routine
- Perceiving: these people are spontaneous, flexible, solve problems as they come up, leave scheduling open as long as possible, believe that much is accomplished at the last minute, are energized by last minute pressures, enjoy starting things (but don't have to finish!), enjoy surprises and feel that play and work coexist

A few weeks back, we filled out a (reliable) questionnaire to determine our personality types, and we received them back this week.  I am an ISTJ - Introvert, Sensing, Thinking, Judging - personality type.  Very interesting, and eye opening for why we act certain ways when we are children!  We were also given a plethora of information on our personality types (there are 16 possible combinations), and the information was what the tendency for the individual personality types tend to be amongst the general population of that type.  Neat stuff!

We also learned a bit about how our brains work, and how that can affect us!  The inner biologist in me really enjoyed that talk!

While this week may not have sounded very "Christian" if you will, it was actually very necessary for us to understand who we are made to be, so that we can fully engage with whatever ministries we go into in the future!

Life this week with the September DTS has been exciting and interesting as we learned how to live with them! BB Hall (the place we eat) has been very full, and the tables are always full!  They started breakfast a bit earlier than us when they were here before, so they are always there when it starts! Good start to the day!  Since they are still doing their DTS, they still have work duties, so I am thankfully not alone on breakfast!

Myself and another trainee are meeting with a staff on the base who does a lot of videography and photography stuff to receive training for how we can take better photos and videos when we go on outreach.  Some DTS' come back with selfies and photos of the scenery (which isn't a bad thing!), but they have nothing from the things they actually did, and the ministries they were a part of, which is why we're doing this!

This past week has been a really interesting week spiritually - God's been remoulding some very core things in my life!  We've also encountered quite a bit of demonic resistance this week (I debated whether or not to include this, but figured I might as well).  We have the power in Christ to defeat the enemy, and whenever we came across these situations, we have prayed, worshipped, and banished the enemy!  I don't know how many times I can say this, but it's really been interesting and eye-opening!

On Thursday night, we has a time to "enter the Father's House".  The classroom was set up with a few different stations for us to peruse as we felt led to.  There was a banqueting table in the middle of the room to feast at and enjoy the presence of the Father with some others.  I won't go into too much detail, but it was a good and cleansing evening!

On Friday, we had our local evangelism in Luton again.  This week, we were challenged to be more intentional with praying for people as we felt led to.  My prayer partner and I only had 2 encounters with people, but they were very emotionally trying encounters.  God has been working in our hearts, helping us to see people how He sees them!

"Now faith is confidence in what we hope for and assurance about what we do not see."
Hebrews 11:1 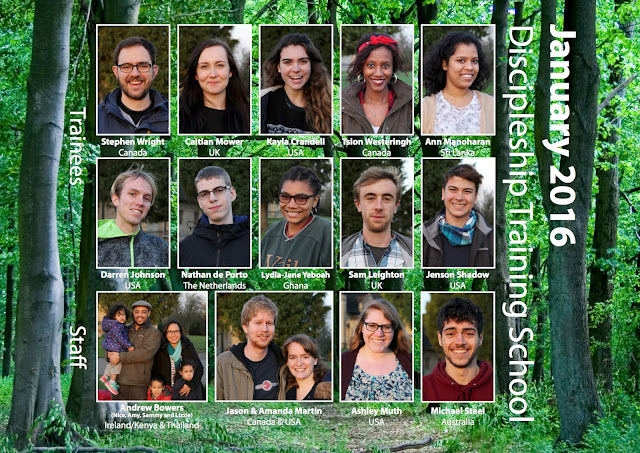 I don't think I've really introduced my DTS - here they are!

BB Hall - Where we eat

Posted by Stephen Wright at 9:40 AM