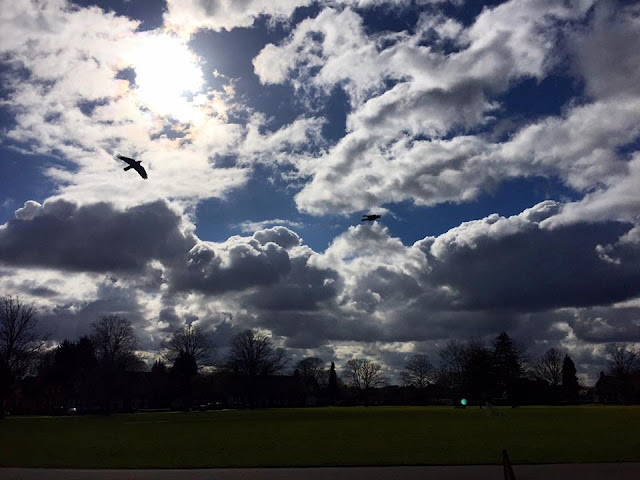 Sky over the Oval this week - credit to Kayla Crandell

Less than 3 weeks until we head out to Albania! Crazy!

This week, we had Connie Taylor from YWAM Cambridge (sound familiar? That's where we're going after Albania!) speaking on Evangelism and Fear of the Lord.  She definitely could've come flying into the classroom on a whirlwind - she has energy to the moon and back!

Connie has been with YWAM for many years, and she has a wealth of experience in sharing the Gospel with others.  It was very encouraging to hear story after story of how she has been a vessel in helping others get to know Christ as our Lord and Saviour! 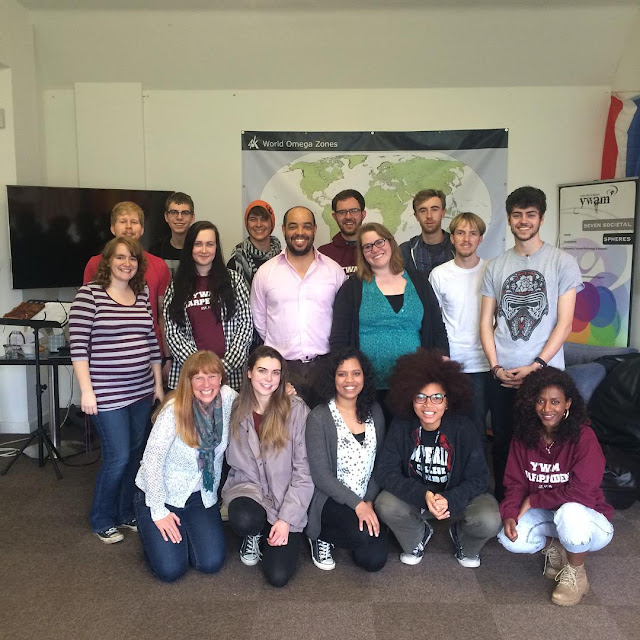 The class with Connie - credit to Kayla Crandell

There is so much more to having a relationship with God our Father, Christ the Son, and the Holy Spirit than just believing that there's a God... the enemy also believes there's a God!

"So many people tiptoe through life, so carefully, to arrive, safely, at death."
- Tony Campolo

We need to live in and out of the overflow of the Father's love for us! It's not enough for us to just walk through life quietly to arrive at death safely!

What is the Fear of Man?

1. Caring more about what people think of us than what God thinks of us.  Saul lost his kingdom when he gave into the fear of man (1 Samuel 15)!
2. Not wanting to offend people
3. When we're more concerned about pleasing people than pleasing God. We can't be people pleasers and please God! (Galatians 1:10 "Am I now trying to win the approval of human beings, or of God? Or am I trying to please people? If I were still trying to please people, I would not be a servant of Christ.")

On Tuesday, we had a time of repentance in class for allowing the spirit of the fear of man take root in us - it was quite powerful!  Then on Wednesday, we went into Luton to put into practice what Connie was teaching us, and evangelize to the people on the street! On Thursday, we had a time of being baptized by the Spirit (I'm not sure how to explain it on here, but if you want to know more, send me a message, and I can try my best to explain it!). 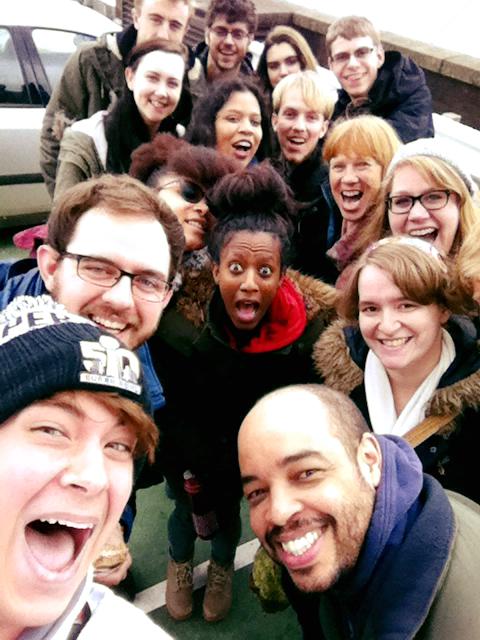 In Luton for Local Evangelism 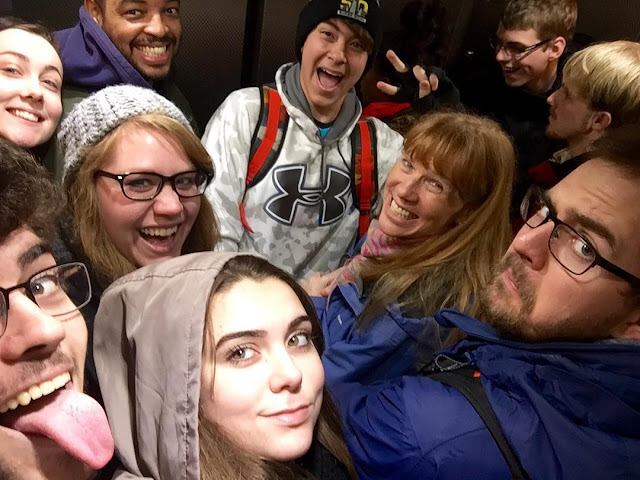 In Luton for Local Evangelism

Last Sunday, Nathan, Kayla and I, along with some other YWAM staff, led the service at our church! It was fun being able to bring some life into an otherwise quiet and traditional-type church.. We sang more modern songs, and made everything a bit more interactive!  It was also Mother's Day in the UK, so there were some flowers and things geared for that.  In the UK, Mother's Day originated from Mothering Sunday, which was a day when people would go back to their "mother church".  As far as I've heard, Mothering Sunday isn't really a big thing anymore. 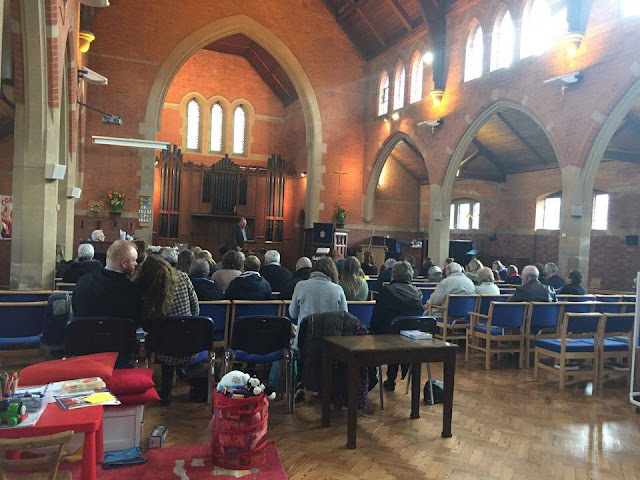 During the Mother's Day service at URC - credit to Kayla Crandell

One of the big things that happened this week was on Tuesday night, the September DTS had their graduation ceremony!  It was a great evening of laughters, tears (for them!), food and dancing! Some of the trainees in their DTS were trained prior to outreach on videography, and they each made a video about their separate outreaches (the Sept DTS went to Uganda, Cambodia and Greece). The videos were very inspiring, and myself and Kayla were inspired and motivated to press forward with our training! I'm excited for how it's going to turn out!  Quite a few of the trainees had family come from all around the world to see them graduate! 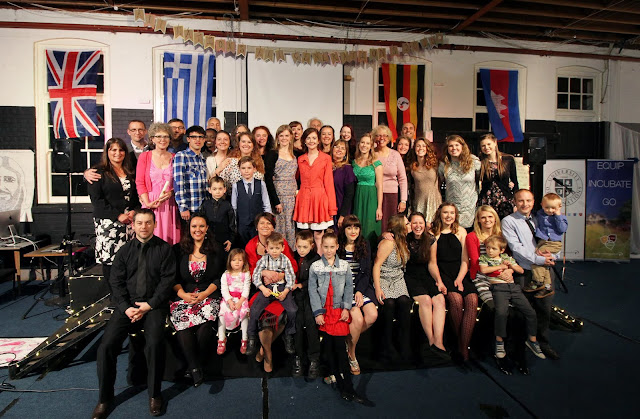 The September DTS at their graduation - photo credit goes to YWAM 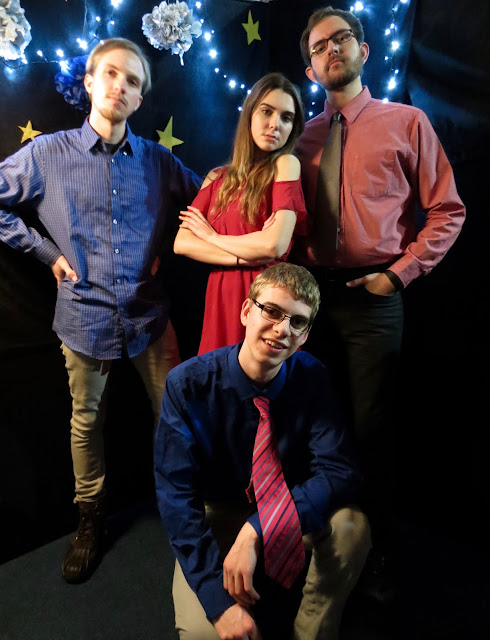 There was a photobooth at the graduation! 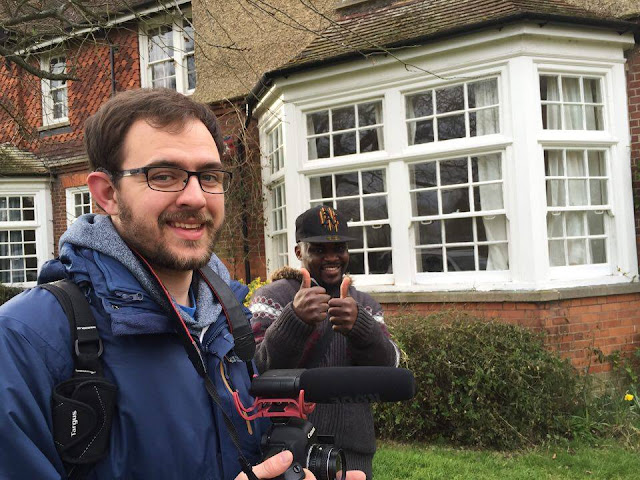 Getting some training with Noel!

From Wednesday to Saturday, the September DTS trainees slowly moved out to go back home, and onto whatever God has in store for them! We got so used to them living here, the building seems so quiet and empty now...

On Thursday night, the January DTS had a fun evening together - we played Telephone Pictionary! Basically a combination of Telephone and Pictionary - everybody wrote down a sentence on a piece of paper, then when the time was up, we passed the stack of papers to the person on our left.  They then had to draw a picture of what the sentence said, and put the sentence on the bottom of the stack.  When the time was up, the stack of papers was passed to the left again, and we had to write a sentence based on the picture we saw.  The picture was put on the bottom of the stack, and the stack was passed on again - this repeated itself until the stack reached the original person - we had a lot of fun reading them out at the end! My original sentence of "The telephone wearing a scarf on a skateboard in jail" came back to me as "sun and mountains" - definitely made sense! 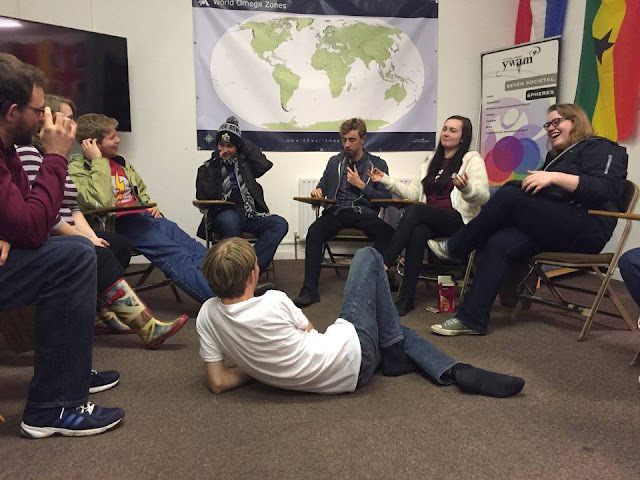 Us dying during Telephone Pictionary - credit to Kayla Crandell

On Friday, we went into Luton again for local evangelism - but one of our trainees felt prompted to play worship in the square by the mall - so we worshipped in the square for a good hour and a half! It was really good, and we were able to strike up meaningful conversations with people who passed by and asked us about what we were doing! 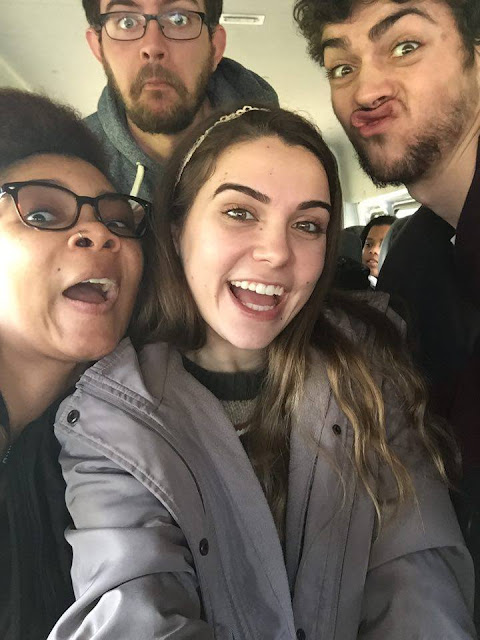 Getting crazy on the way into Luton for Local Evangelism

That evening was Unveiled Worship in the Chapel - just a time of worshipping however you feel led to, and soaking in the presence of the Father.  It's always a great time! Some people dance, some paint, some sculpt, others sing along, and some just sit and soak in the music!

Saturday was beautiful - a rare occasion in England! The weather was quite warm, and the sun was out, so a bunch of us played frisbee on the Oval (the grass) for a good part of the afternoon! 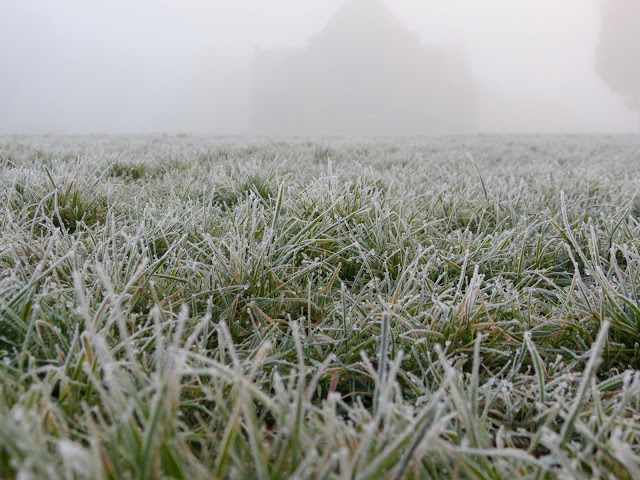 Frosty morning on the Oval this week

"The fear of the LORD is a fountain of life, turning a person from the snares of death."
- Proverbs 14:27

Posted by Stephen Wright at 3:12 PM