Back to the land of the living! For those of you that don't know, I felt very strongly that God wanted me to go an "electronics fast" of a sort - no computer or iPod for a week (Sunday night to Friday night).  Monday was rough, but the rest of the week was really refreshing to not have any distractions!  The thing I probably missed the most was my music.. Blasting music in BB Hall at 7 in the morning when no one else is there makes it not feel like it's so early! 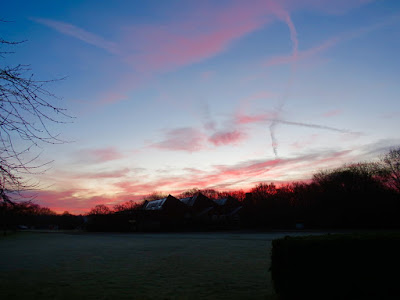 Sunrise over the Factory this week 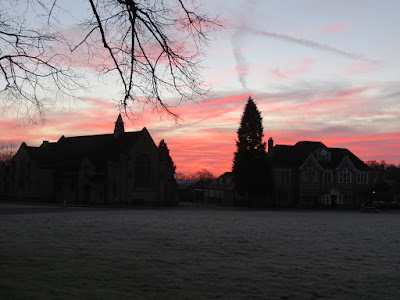 Sunrise over the Chapel and Clock Building this week

The theme for this week was the Holy Spirit - led by Mark Vening of YWAM Wales - it was a very good week!

We started off the week looking at just how human and personable Jesus was:


In your relationships with one another, have the same mindset as Christ Jesus: Who, being in very nature God, did not consider equality with God something to be used to his own advantage; rather, he made himself nothing by taking the very nature of a servant, being made in human likeness. And being found in appearance as a man, he humbled himself by becoming obedient to death— even death on a cross!
Philippians 2:5-8

As stated in the passage above, Jesus literally "made himself nothing" by becoming a human.  Jesus had to learn how to talk, walk and eat as a baby.  Jesus gave up his "Godness" when he came to Earth.  He was completely vulnerable to the same things that we are.

We then went on to discuss WHEN Jesus knew he was the Son of God.  When Jesus was 30, he was baptized by John the Baptist - the Spirit of God descended upon him like a dove, and a voice from heaven said, "This is my Son, whom I love; with him I am well pleased." (end of Matthew 3).  At this point we know the Jesus knows he is the Son of God.  The Holy Spirit is crucial here, because once Jesus was filled with the Spirit, he was able to start his ministry.

We also discussed the Personhood of the Holy Spirit - in the Western World, the Holy Spirit tends to be seen as this "thing" that does some work for God the Father, and the Son Jesus Christ, but in fact, they are a Trinity - they work together as one! John 15:26 says "When the Advocate comes, whom I will send to you from the Father - the Spirit of truth who goes out from the Father - HE will testify about me" - there are SO MANY examples of the Holy Spirit being referred to as a "He" - makes me wonder how I haven't seen it before!  Also, in Ephesians 4:30, "... and do not grieve the Holy Spirit of God..." - the Holy Spirit can grieve - He is personable and relatable!  It's been a good week of examining what I believe in, and recognizing that there is so much more out there!

We also went on to discuss the gifts of the Spirit - it's quite amazing how accessible they are.  We've been hindered by the Western World's point of view regarding some areas regarding many of the gifts.  I can't really put into words what we learned that will make sense, so feel free to ask any questions!

On Monday, during our outreach prep time, we had to prepare a short 2-3 min testimony ahead of time, and give it to the class.  We were then given feedback on how we did, so we can better our testimonies for other people.

Monday evening was neat - during our Freedom Class slot, the mature Christians on the base were broken off into smaller groups of three, and one DTS student went to each group.  They then prayed over us for God to reveal to them what He wanted to say about each student regarding their Original Design - how God originally designed us!  Reactions from the students were quite varied, but all-in-all, it was a really good experience!

Tuesday was Pancake Tuesday! One of our DTS students made up a bunch of "pancakes" (technically they're crepes, but British people get testy about their pancakes - crepes are very different according to them!) to eat when we were done for the day! 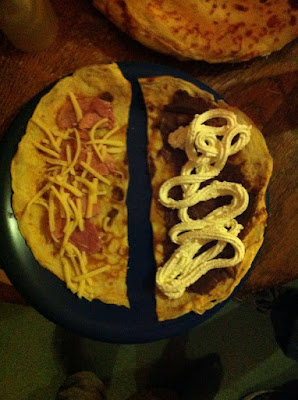 My "pancake" - it was excellent - I've never put toppings on one and rolled it up before!

On Wednesday, we had our first outreach team session - just the people who will be going to Albania! We went over some of our expectations, the things we're excited for, and the things we're 'worried' about - it was a good time!

On Thursday, we had to creatively present the chapters we were assigned to in groups - it was great fun! My group wrote a song - hilarious - if I can figure out how to upload the video without it taking hours, I'll do that!

On Friday, we took the train into Luton (let me just say - trains are pretty neat!) - we were paired off to prayerwalk around the mall area again - this time, the person we were paired with will be the person we stay with for the rest of the Lecture phase.  Due to complications with the school we were originally going to be going to to help with the afterschool program, we unfortunately won't be helping out there anymore - but we get to pray for the people in the mall, so everything will work out well!  My partner (also a Canadian) and I had a very unique first experience - can't wait to see what next week brings!

In the evening on Friday, I went to my second ECO (English Cultural Orientation) culture night - the country of the night was Ecuador - great food, dancing and fun!  After that, I headed over to the chapel for a night of "Unveiled Worship".  It's an event that's run the 2nd Friday of every month (my first one), where there's a time of very informal worship, people come and leave any time between 8 and 12, and they can sing along and worship, pray, paint, dance, or however they feel like worshipping God! 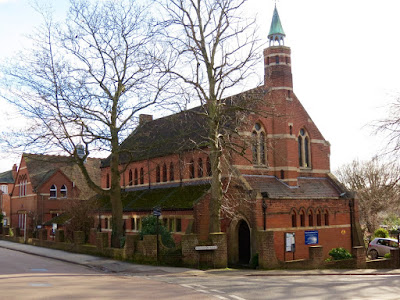 The Church I have been attending in Harpenden - United Reformed Church 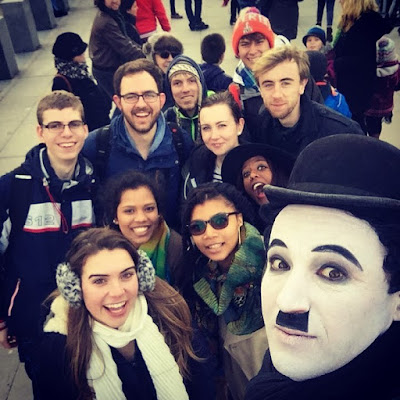 Preview for next week's post - our trip to London! In the meantime - meet Charlie Chaplin!