Man, another week has flown by!

Our lecture topic for the week was Jesus, Sin & the Cross, and the speaker was Ben Foster from YWAM Coventry.  It was such an intense week, that I don't even know if I can put it into words!

One of the topics that we touched on during the week were the 9 exchanges that occurred at the cross:

If anyone has questions about this, feel free to ask me - I have very extensive notes, and I'm just trying to simplify what we learned!

On Monday, for our outreach prep time, we had a session on public speaking from Jessica (a woman on the base), we have to prepare a short testimony (3 min) for this coming week to share with the class to practice our public speaking skills!

On Thursday, in lectures, we had a time of public confession and repentance to Jesus - that was super intense, and I won't say too much about it, since it was a very personal time for all of us.

On Friday afternoon, we headed into a nearby city - Luton - to do our weekly outreach.  The trainees have been split into 2 groups of 5, and each week, one group will be helping out with an afterschool program with local underprivileged kids, playing sports with them.  The other group will be prayerwalking around certain areas of Luton.  We will be rotating the groups each week, and it may be a bit different in the future, but for now, this is what's happening.  Due to complications with our police checks, we weren't able to start with the afterschool program this week, so all of us went to the mall and shopping district to pray over the area, and pray for people if we felt led to do so.

I apologize for the shortness of this post, a lot has really happened this week, but it's just been so intense, that it's hard to put into words! 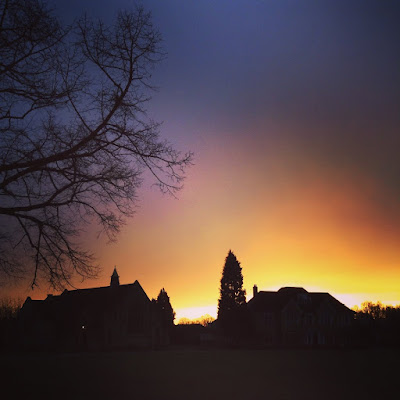 The sunrise earlier this week - I got a picture right before the sun disappeared and it rained on us!

Posted by Stephen Wright at 6:18 AM