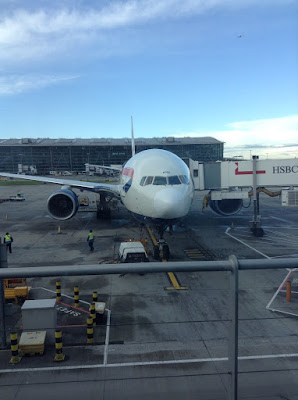 After I got off my plane!

Shortly after arriving, I met up with two of the staff members and another student who was also arriving near the same time, and made our way back to the base.

For the rest of the day, other students eventually arrived, and everyone was here by dinner! (Well, almost everyone - I'll get to that shortly)... We are a very diverse group, ranging in ages of 18-24, and nationalities from the US, Canada, Dominican Republic, Britain, The Netherlands and Germany.  We currently number 5 guys and 3 girls, with one more girl arriving tomorrow (Tuesday) and another guy hopefully arriving Wednesday! There are also 2 more girls and one guy who may arrive later depending on personal circumstances, so prayers for things to go smoothly are welcome!

Today, we have had a lot of orientation to the base and for our DTS.  Our DTS leader is Andrew Bowers, and he lives here with his wife and children.  There are also four other staff leaders that help run my DTS!

YWAM Harpenden is a former "orphanage" of a sort - it was founded in the late 1800's to support impoverished children in England (London), but became a YWAM base in the 1980's.  There are many buildings here on an "oval" - they all sit on an oval road with a large green space in the middle; it's really quite nice!

Items of interest so far:
- I've seen some flowers growing here! (Daffodils) - those would be long dead and buried under snow in Canada, haha
- residents of Britain have to buy a tv license in order to watch tv live (yet, they can watch tv an hour after the show has aired no problem - the logic doesn't make sense to me just yet..)
- there is a film out in theatres (or it was recently) called Suffragette - a few of their scenes (laundry scenes?) were filmed here!

So far everything has been great, and it's been pretty awesome meeting so many new people! Looking forward to getting to know God and my DTS group much better over the coming weeks!

"For we know that our old self was crucified with him so that the body of sin might be done away with, that we should no longer be slaves to sin - because anyone who has died has been freed from sin."
Romans 6:6-7