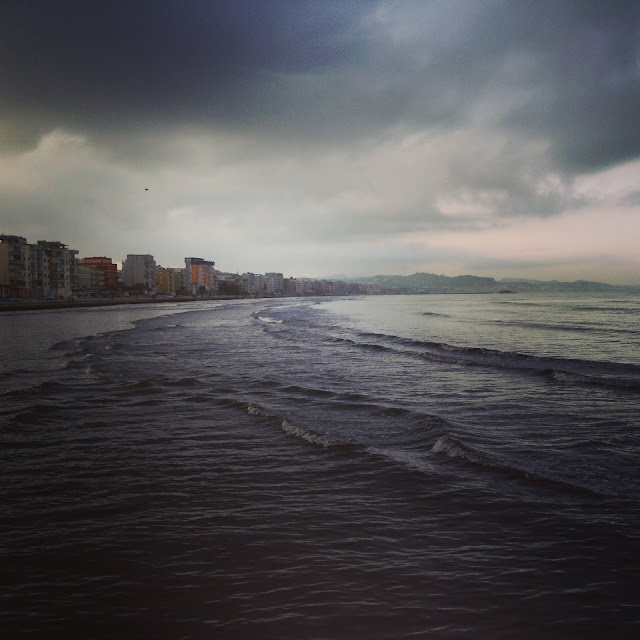 It's been a bit of a stormy week - this was in the early morning during one of my runs! 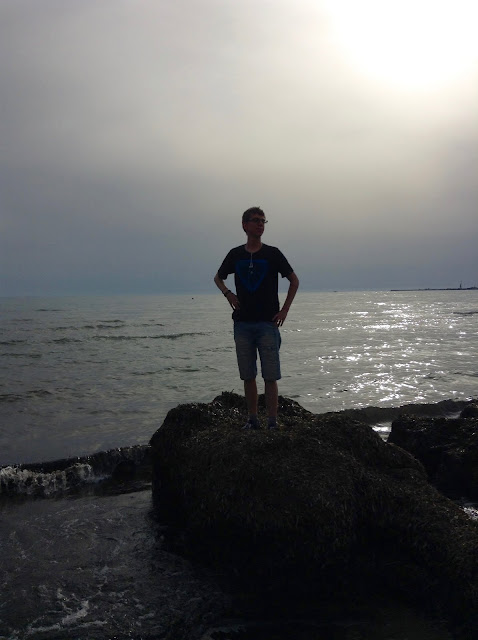 Yes - that's a pile of seaweed - there's a lot on the beaches here! 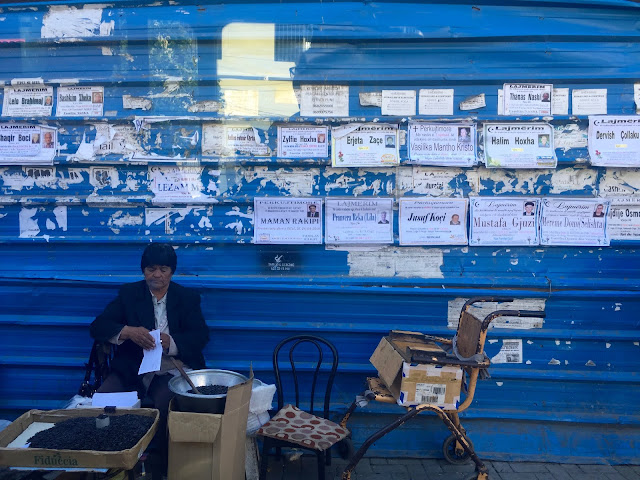 A coffee vendor sits in front of a wall with funeral notices - in Albania, whenever a person dies, their funeral information is printed on a piece of paper and posted on the walls in public areas notifying the public of their death.  These are changed almost every 24 hours! 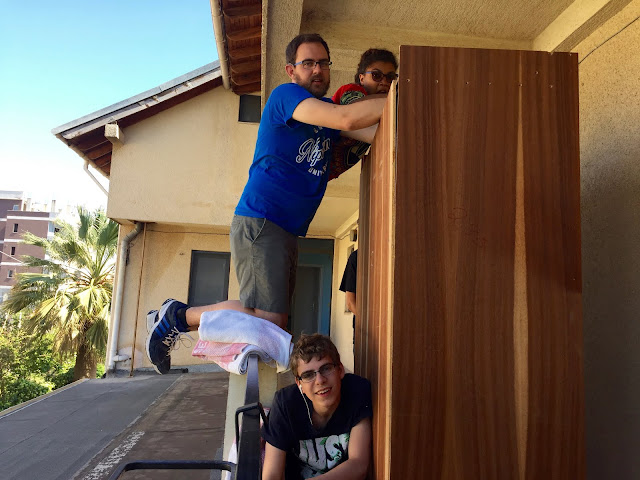 Helping dismantle a shelf unit so that it could be moved to another building!

Last Saturday, YWAM Albania had a staff day at the Durrës base, so our DTS helped out by making meals, watching the children, etc.  One of the DTS “rules” is that the trainees get at least one day off each week, which is usually Saturdays, however, since we were helping out with the staff day, we got Monday off instead!  On Sunday, two of our trainees shared their testimonies at the church we had been helping out at for the prior week – the service was in Albanian (but we had a translator for the sermon), so that was interesting, since we had no idea what was happening!

On Tuesday, the Durrës DTS left for their local outreach – we’ll see them again in about a week or so before they head out for their out-of-country outreach!  Goodbyes suck, especially when you start building a relationship with the people who are leaving…

Tuesday, Wednesday and Thursday this week, we were working with a local Christian school/daycare in the city, they run a half-day program for children from broken and impoverished families that can’t afford to send them to school.  There are about 40 kids in the program, and they are an interesting mix! They range in age from about 7-12, and have varying degrees of English skill.  We’ve done a mix of face-painting, balloons, parachute games, football, songs, Bible stories, English lessons and helped out with some practical work that needed doing. 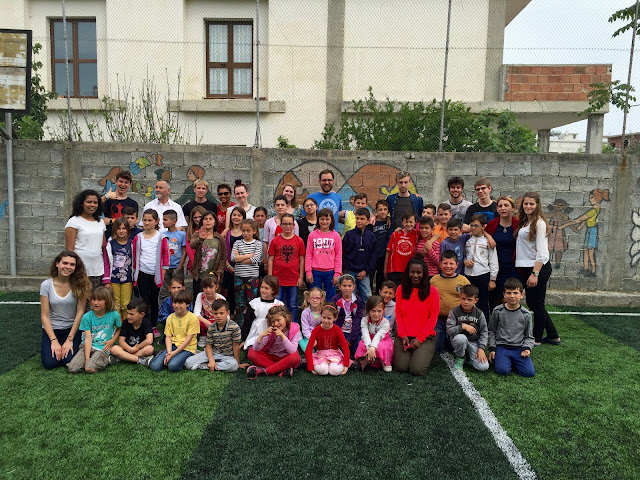 The DTS with the staff and students at the school 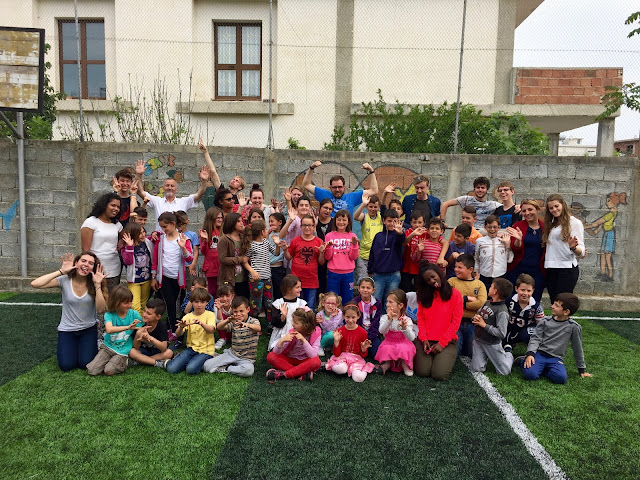 The DTS with the staff and students at the school - silly pose! 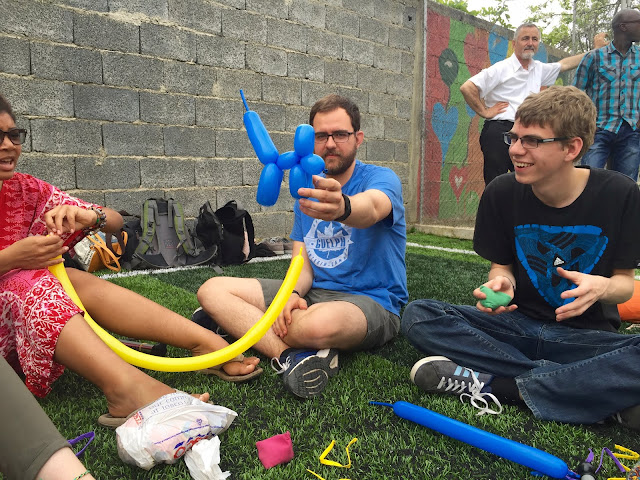 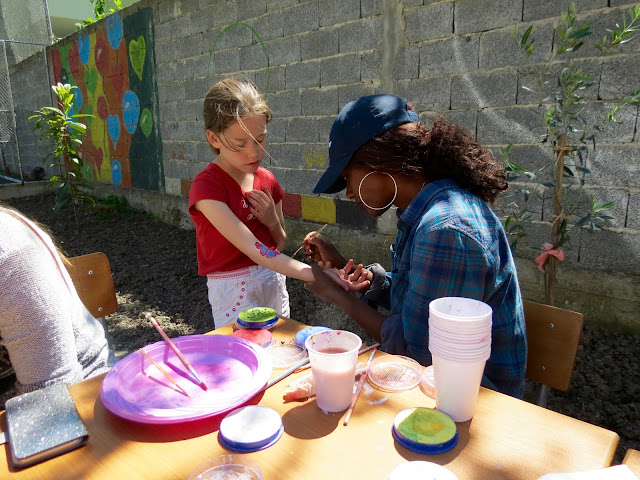 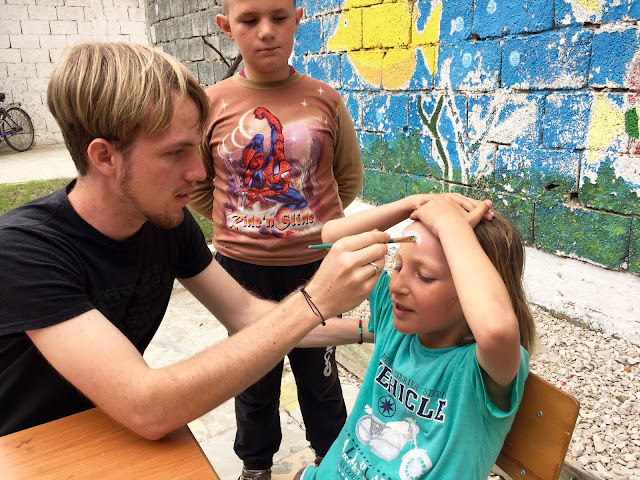 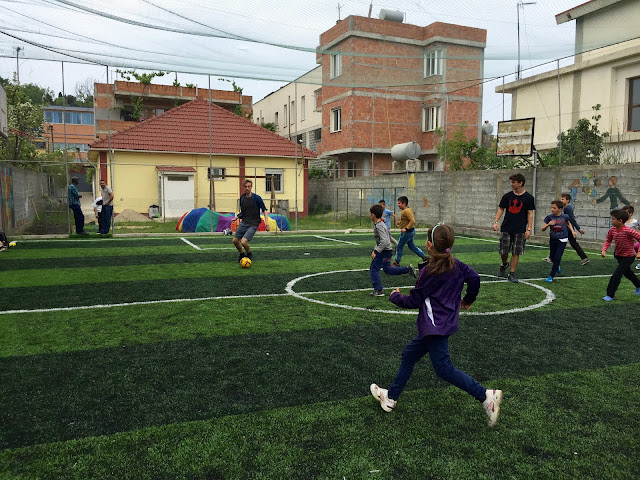 Playing football with the students 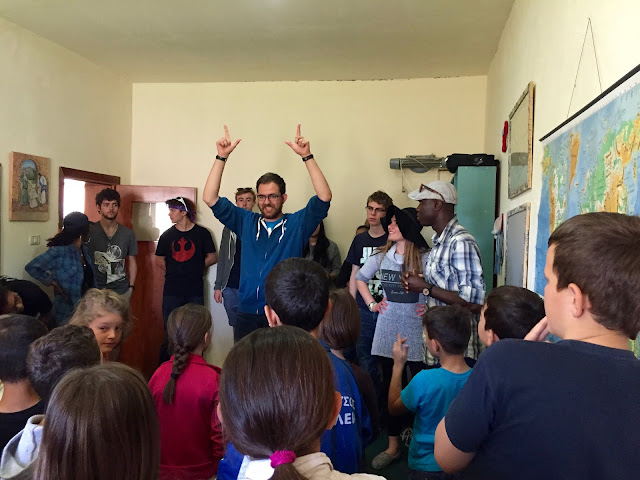 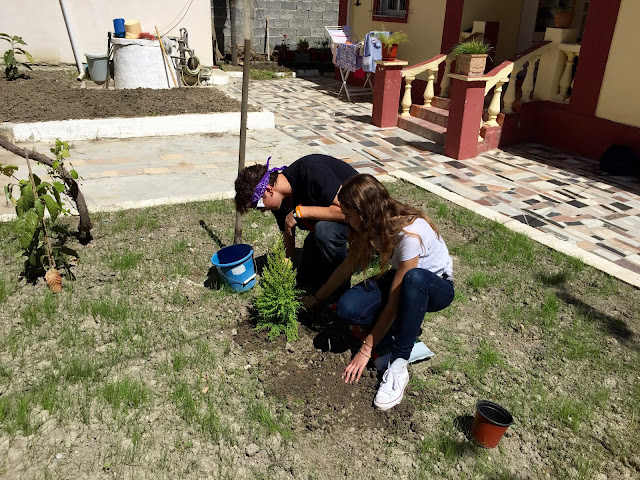 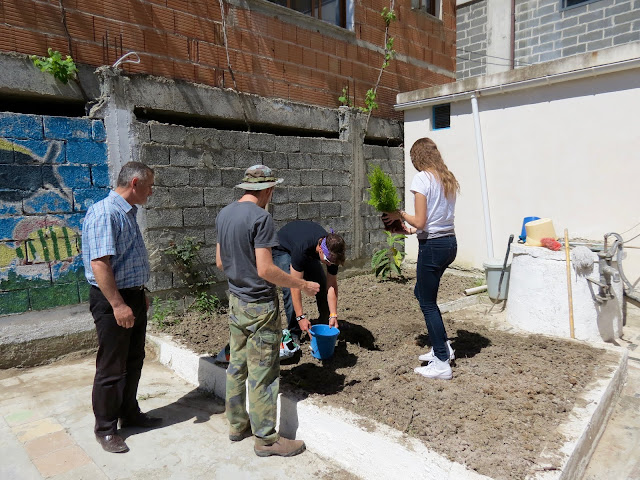 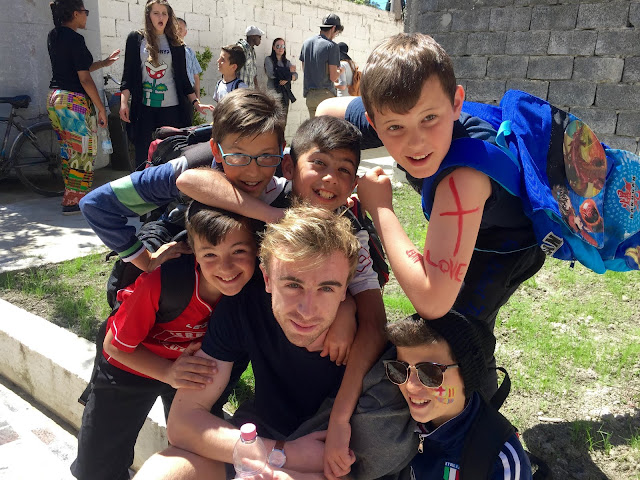 Just having fun with the kids!

On Friday, we went down to the beach in the morning to evangelize however that looked.  We brought the parachute and football (soccer ball for the Canadians and Americans), and got a few kids playing with us.  Some of the trainees also did some facepainting on the kids, while others talked to their parents (if they spoke English).  All of a sudden, we were surrounded by over 50 teenagers from the local school – they were out on the beach picking up trash!  We had the parachute out, so some joined with that, some got some facepainting done, some played football, and others just chatted with us – it was quite something!  We were able to invite some back to the base in the afternoon to practice their English with us. 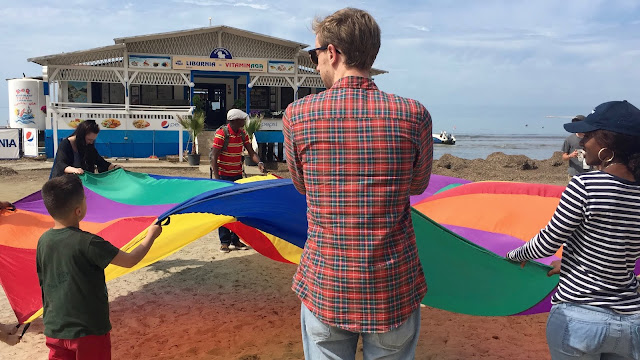 Parachute on the beach! 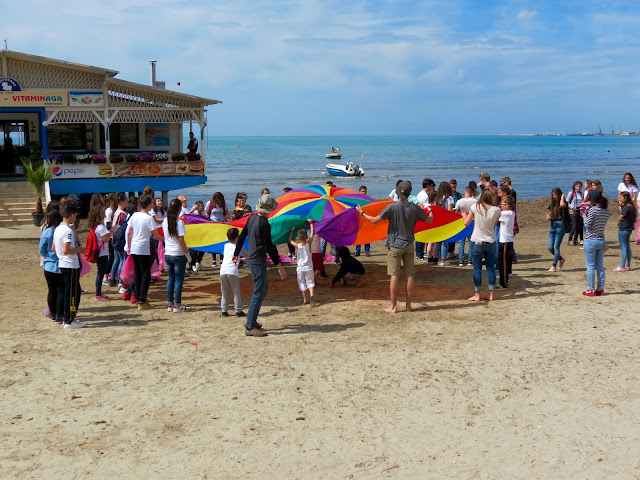 Soon joined by a mass of teenagers! 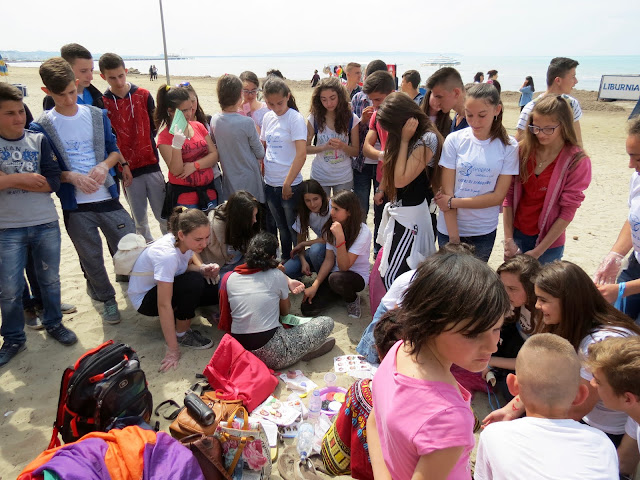 The teens wanted facepaint too!

Saturday, we were able to go into Tirana for the day, had some drinks at a local café, ate lunch at a restaurant (The Stephen Center – I approve of the name!), and went to a mall, where some trainees watched a movie in the theatre.  We were going to go up a cable car into the mountains, but we would’ve had to take a few extra busses to get there, and it was already getting later in the day! Still a fun outing though. 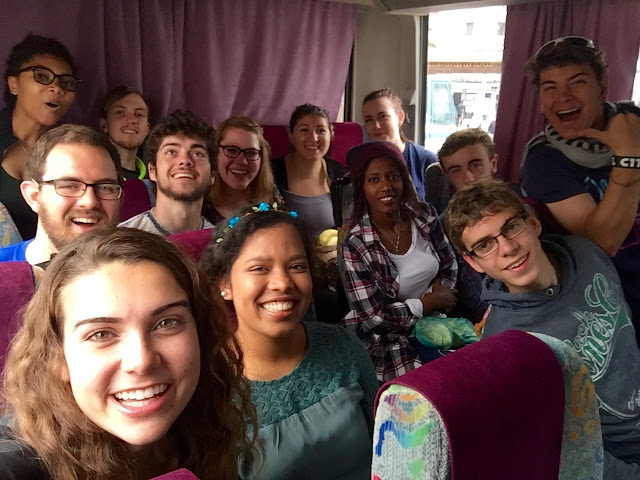 Group selfie on the bus!