One week of outreach completed! Our time in Albania has flown by so fast already!

We left the base (YWAM Harpenden) last Saturday at 2 AM, arrived at the airport by about 2:45, had to wait until 4:00 for the bag deposit/checking-in area to open, once it did, we checked in and dropped off our checked baggage.  Went through security without any major issues (one trainee accidentally had their toothpaste in their bag, so they were stopped momentarily), then finally left England at 6!  Two hour flight, and arrived in Vienna, Austria at 9 (1 hour time difference from England) – had a 3 hour layover – many of us took the opportunity to catch up on sleep, if we hadn’t done so on the flight – I was lucky and was able to get 3 hours of sleep the night before, others weren’t so lucky and didn’t get any sleep! Then a 1 ½ hour flight from Vienna to Albania, and we arrived! We were fortunate, and everyone’s bags arrived without any issues.  Met up with our contact, loaded the minibus and we were off to the base! 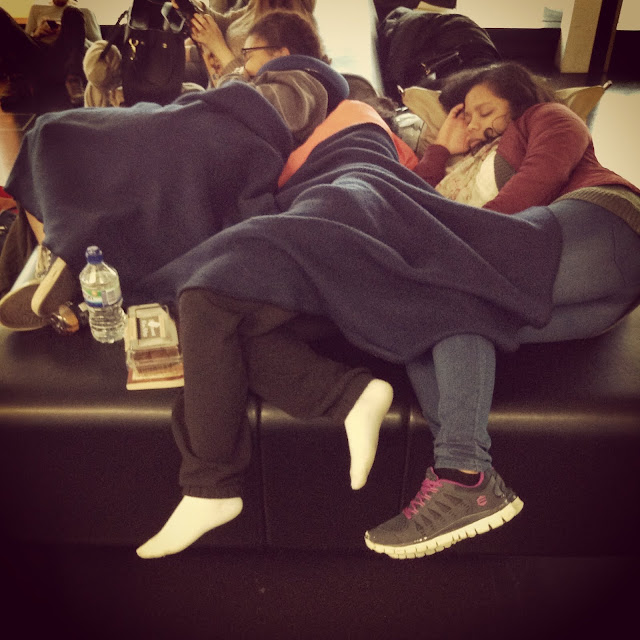 Naps in the airport! 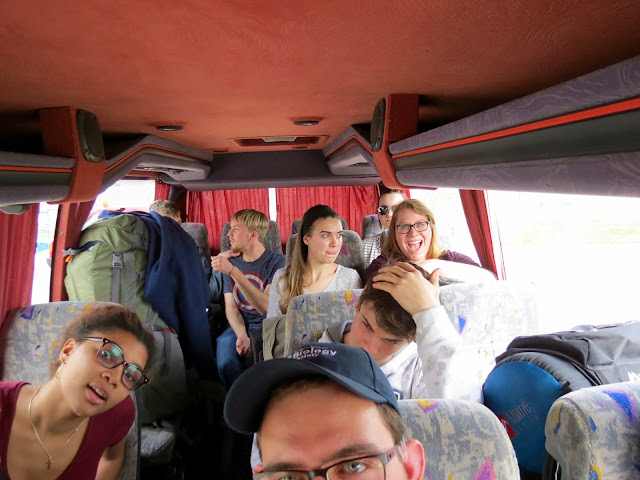 Minibus loaded and off to the base!

Our first impression of Albania was very different for each of us.  Some of our trainees have lived in 3rd World countries before, so Albania was very familiar to them, but for those of us from the “Western World”, it was an interesting first experience.  There are cattle, chickens, sheep and goats all over the place, stray dogs abound.  Many brick and cemented buildings that look half-complete or falling apart – none of us are quite sure which it is!  Albania has a lot of open manholes and potholes in the sidewalks, so we have to be aware of where we’re stepping! 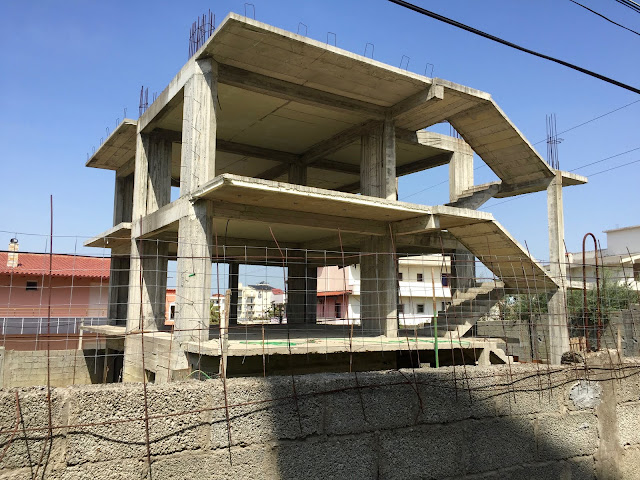 One of the many incomplete structures in the city 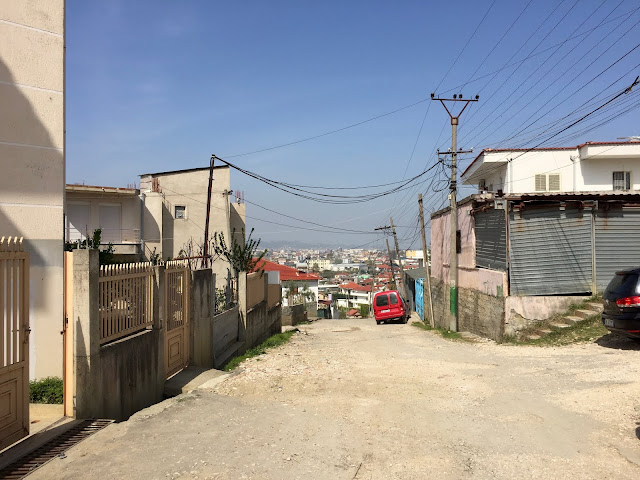 Looking down over the city 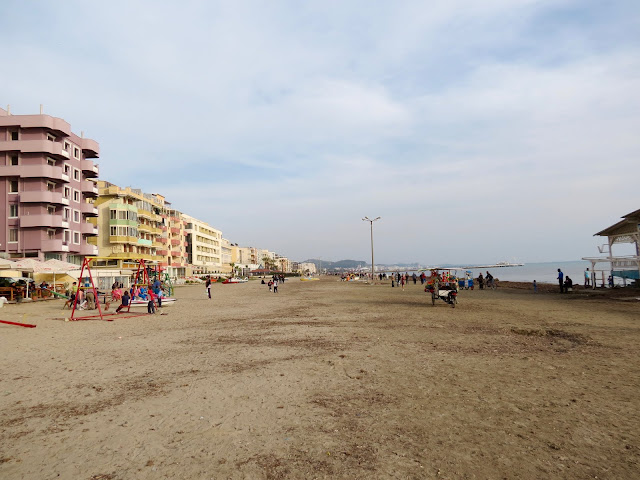 The beach here - the sand is really nice! Hopefully we can go swimming soon!

We landed in the capital city of Albania – Tirana – and drove out to another city, Durrës, the 2nd largest city in Albania, where we’re staying for a few weeks.  We’re staying at a YWAM base, which is in an old hotel – they have very nice facilities here! There are a number of staff from around the world, and a DTS that is also running at the same time as us – in fact, they leave for their outreach in a week’s time!

The Albanians use a form of currency, called the lekë – about 96 lekës (or so) is 1 Canadian dollar – you can buy a scoop of ice cream from a local bakery/ice cream shop for 50 lekës (and it’s really good here! They make their own ice cream, it’s all naturally flavoured, and they make it look really fancy in the display cases!).  Speaking of Albanian food – their sufllaqe’s (soo-flah-chay) are amazing – it’s like a mixture of French fries, tomatoes, sauces of some sort, chicken, ketchup and cucumber wrapped in a flatbread!

A sufllaqe - amazing!
Albanian people (they call themselves shqip or shqiptar – the country is Shqipëri) are a very friendly people once you get to know them – in their culture, it is normal to stare at passerby’s, which can be a bit unnerving if you aren’t used to that.  They also dress very smartly, clean up well, and drive nice cars, however, their city is another story, which is interesting.

Where we are located was really hot for us when we arrived, I’m now used to the temperature – but there’s a lot of sun - I got sunburnt on the first day! Oops.. tracking down sunscreen was no easy feat, but I managed to find some in a local pharmacy!

On our first full day here (Sunday), myself and a few of the other trainees went on a prayer walk (for those of you who don’t know what that is, it’s a time of praying over the things God brings to mind as you walk through an area).  One of our previous lecturers mentioned that they would ask God where to go every time they reached an intersection on one of their prayer walks, so we decided to take that form (since we didn’t know the city), and let Him lead us wherever He wanted us to go! It was a really unique experience, as we ended up on the top of a hill, and could see most of the city of Durrës!  God really spoke to us in that time, using a variety of means to speak to each of us.  We were able to pray and worship Him a bit in that time!

Also on Sunday, we had our first meaningful conversation with some people on the beach – building connections and relationships!

The current DTS is a bilingual school, so whenever there is a speaker, everything is translated into Albanian (or English, depending who’s speaking), and all the worship songs that are projected are written in English and Albanian.  They are a very friendly and enthusiastic group – we’ve been having a good time with them!

On Monday, we had our first public transit experience.  I thought the buses were bad when I was in university, but these buses are jam-packed – almost literally body-to-body packed!  We bussed to the downtown part of the city (we’re based in the outskirts), and our contact showed us around a bit.  We got to explore the largest amphitheater in the Balkans, so that was unique, and we walked along the beach a bit.

The amphitheater - it was really neat to explore! 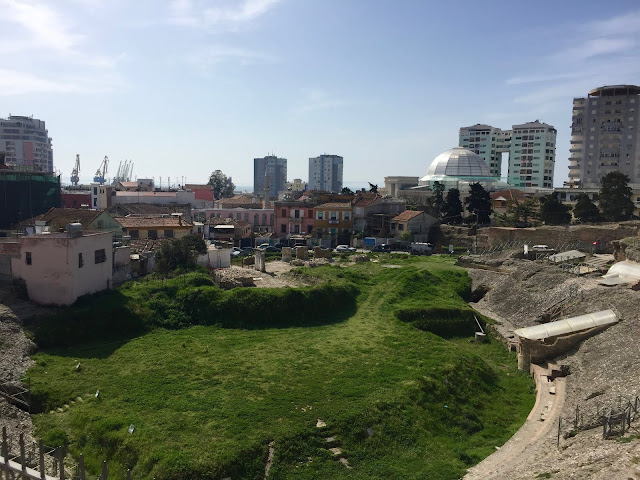 The amphitheater from above

The beach in downtown Durrës 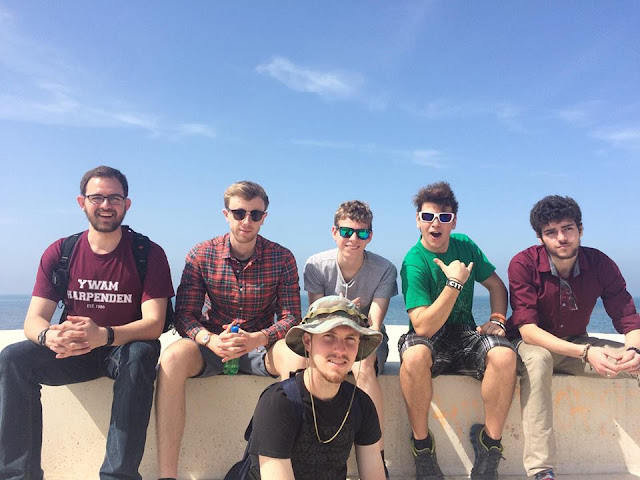 The boys at the beach!

This week has been more of a “getting settled and oriented to Albania” week, next week we dive into more missions stuff!  We’ve done a lot of practical work here to help out the base (they just started renting the property in November, and are in the process of raising the funds to purchase it) – I’ve done a lot of gardening, some are sanding rust off chairs and painting them, some are ironing sheets – lots to help with!  It’s been great being able to bless the base however we can.  While here, we also have work duties to do – I’m back and forth between Hospitality and Dinner Prep – it depends if we’re doing any ministries in the afternoon or not!  Other people are on breakfast, lunch and dinner clean-up, maintenance, hospitality, and general cleaning.

Twice this week, we’ve been able to visit a local school – we’re just building relationships with the children.  On the one day, we were in two classes (ages 5-6ish), taught the story of the tortoise and the hare (turtle and the rabbit for translational purposes), and did a craft with them (we had cut out paper turtles, and gave them out for the kids to colour in).  The second day we were there, we were speaking to 11-14 year olds in English to help practice their English (just conversational – asking them questions about Albania, families, etc to help build their skills). 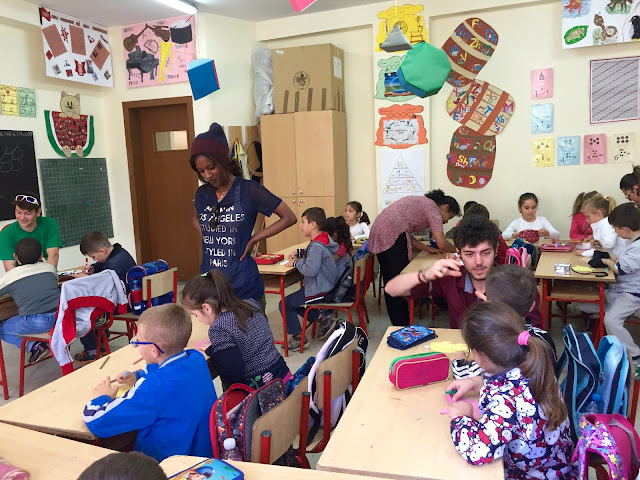 Helping out with crafts in one of the classes 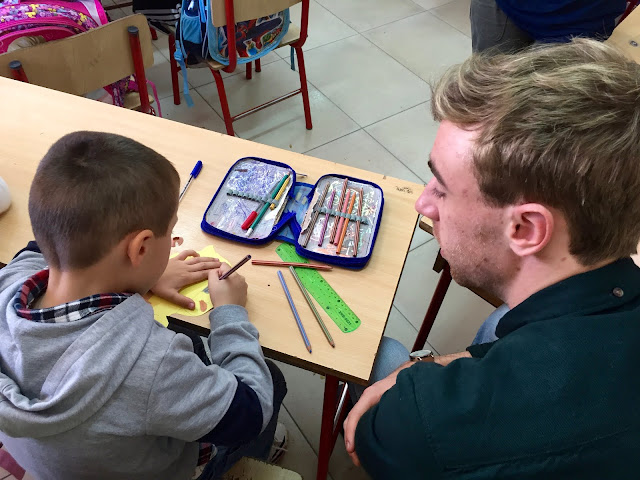 One of our trainees helping out with crafts 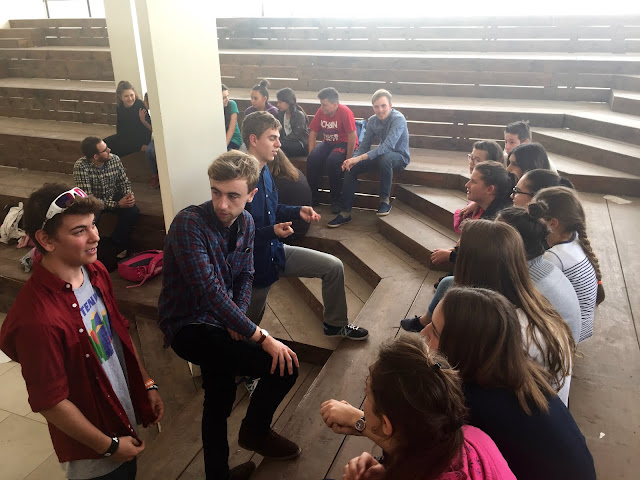 Talking to the young teens in English 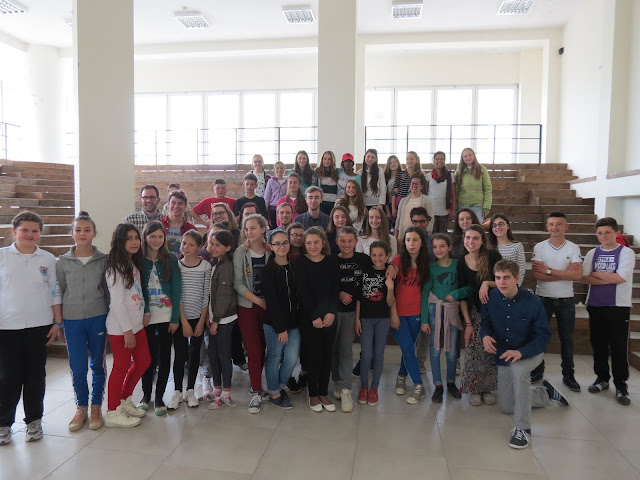 We had a really good turnout when we were talking to the kids in the school!

On one of our prayer walks this week, we had the opportunity to enter a local mosque – there was a “tour guide” who spoke to us about Islam, what they believed, etc.  He readily answered many questions that we had!  It was definitely a very unique and eye-opening experience, seeing that Muslims believe a lot of what Christians believe, they just don’t believe that Christ is the Son of God, and that He is risen! 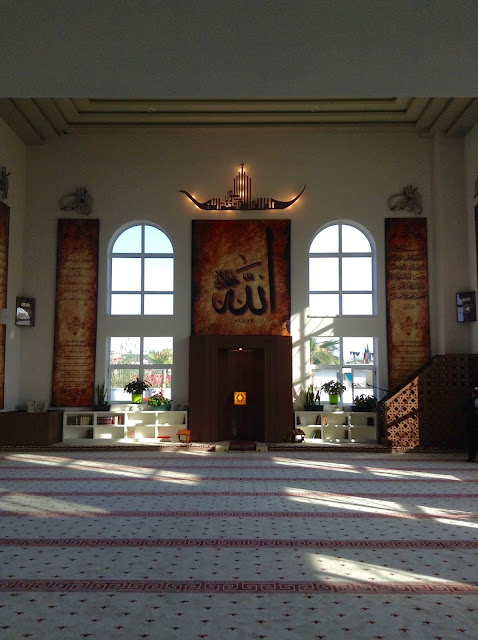 Inside the mosque we got to visit

It’s been an amazing first week, and we’re all looking forward to whatever is next for us!

Prayer is greatly appreciated, some things you could pray for:

- Continuation of relationship-building with the locals – that we could build lasting and meaningful relationships with them, be involved, and not just be ‘confined’ to the base
- That we wouldn’t succumb to the enemy’s attacks, but rather, would stand strong – a few of us have been under attack spiritually over the past week
- That we wouldn’t let the language barrier come between us and our ministries 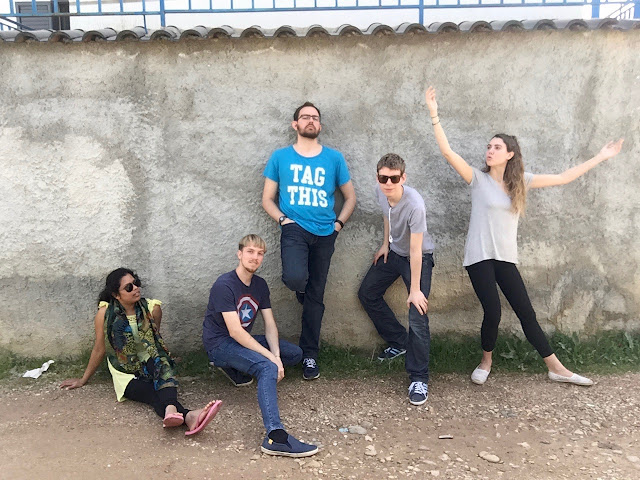 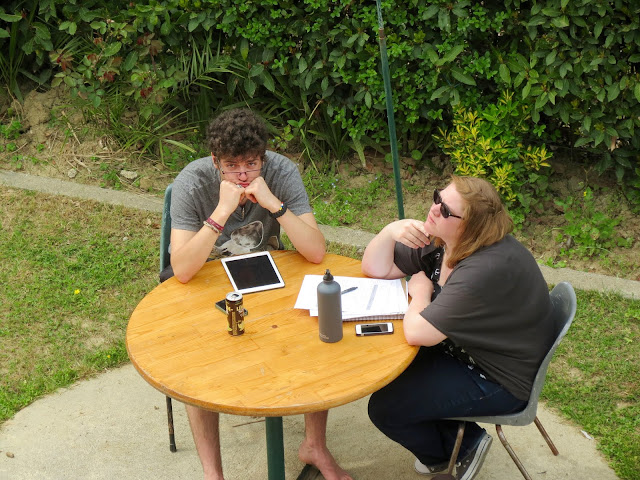 Posted by Stephen Wright at 5:40 AM